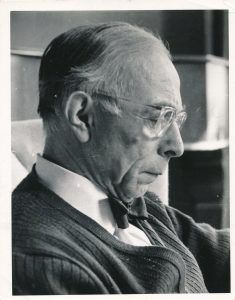 Eric Fenby died in 1997 at the age of 91 and is buried in his native Yorkshire with Rowena, his wife for over 50 years. His time as Delius’s amanuensis was the formative experience that was to govern his entire life.

During the war he was in the Royal Army Education Corp and afterwards he founded the Music Department at the North Riding Training College. In 1962 he was the Artistic Director of the Delius Centenary Festival and later that year he received the OBE for services to music. He went on to become Professor of Harmony at the Royal Academy of Music and was awarded several Honorary Doctorates.

As a composer, his own best known work is the gently humorous overture Rossini on Ilkla Moor played at the proms in 1941. In later life he made various outstanding recordings, accompanying the Delius Violin Sonatas and then conducting the dictated orchestral works, fittingly entitled The Fenby Legacy.